It always amazes me by how permissive some memes can get with the internet culture, specifically video game memes. It’s not like the general lifespan of a meme where somebody posts some witticism on the internet and it takes off, plateaus, crashes in a firey forest of overuse and misuse only to be resurrected for nostalgia sake. Video game memes are a special kind of coincidence. Where the hive-mind of the gaming population experiences the ridiculous, the outrageous or the cringe-worthy at roughly the same time only to be used as the punchline of ridiculousness in the future.

VG Memes aren’t passed around as readily as Internet Memes and that makes the experience a bit strange for me. It’s not like someone made a funny, then people start passing it around to one another. It’s more like something was coincidentally strange and people just happened upon it at the same time. Like everyone watching a TV Show or skit from SNL at roughly the same time and now it becomes part of the collective consciousness of pop culture. Like using punchlines of Michael Bay for the over the top spectacle, Tarantino for excess in violence and blood, or M Night Shyamalan for degradation of work; we have similar remarks for Hideo Kojima and heavy handed plot, Suda 51 for heavy handed plot, Telltale for Character-Driven adventure games.

We use these figures as the vernacular to not only be used as a punchline but to get an understanding across. We know what it means to have Michael Bay-esque levels of explosions in a movie so we can use this phrase for description instead of going through and describing what this means.  We use these memes as shorthand for getting ideas across, but we also use them for sharing the strangeness that has already been experienced. And as gamers, there is a lot of diversity to the strange experiences that have had within a game.

I think the reason why I’m focusing more on VG Memes is because there is a different tying of experiences when it comes to VG Memes. You’re in the middle of playing a game, an interactive and engaged experience where you’re both guided by the developer to have an expected experience and you have varying levels of control over many of your actions and your motives making the experience also guided by you, your playstyle and your mindset. In a confluence of these different phenomena, there is something off-putting in the midst of the game which offsets a lot of the experience for you. The game’s creep-factor gets a bit too high on the poop-your-pants-o-meter, or you’re juxtaposed with something completely ridiculous that breaks the experience somewhat.

You start imagining this man around every darkened corner of your real life and every creepy-pasta you come across for the next few months adds fuel to the SlenderMan fan-games.

As for non-scary memes, though, they seem to only be popular because of how cringe-worhty they are. Not the ironic “We’re making fun of ourselves, hey everybody look at us” cringe but the “We’re trying to have a serious moment and there is no way that can happen because of how awkward the scene is” cringe.

You start seeing this man’s lovely face everywhere because it is just so eyecatching in his dismorphia. 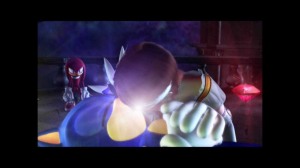 Beasteality becomes the new running gag in the Sonic Franchise, apart from the previously held label that “Nothing is as bad as Sonic 06.” (Until Sonic Boom came out, I mean)

Yup, nothing strange about this mechanic in a super spy, politically charged action game.

Resident Evil can singlehandedly be its own post in meme-generation because it’s been around for so long, brought us so many face-palming “Why would someone ever allow this to go through” moments, and an exercise in how to break a gamer’s experience by putting just a bit too much into your game.

Memes work because they get an idea across. They can be deep, they can be witty, they can instill an emotion with just a picture. Video Game Memes don’t just evoke an emotion or a single experience, but they evoke a set of experiences that we’ve had with the medium and the source material. They bring us back to all of the strange and the wonderful that we’ve had with a game. We use it to portray life experiences as well as gaming experiences. The ridiculous and the absurd. The life-changing and the life-harming. And to get a few laughs in there.