Gaming on Data: Gaming Script – Who is this Written For, Third Graders!? 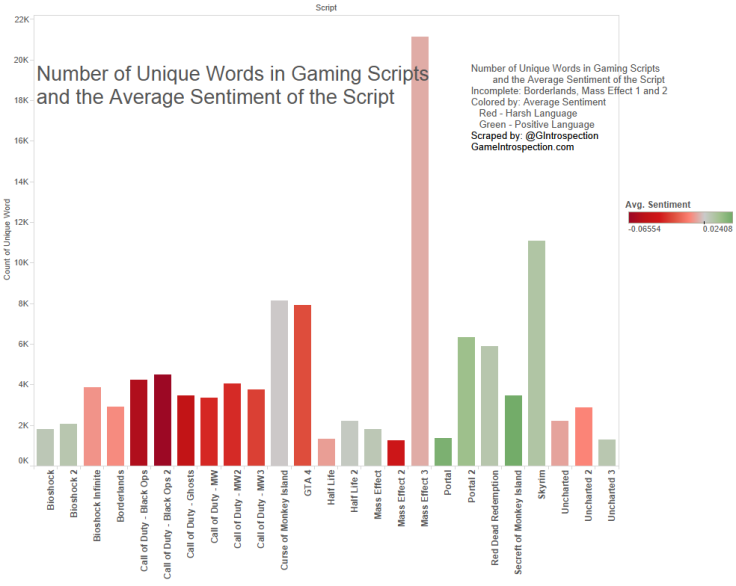 A game from the 30,000 foot view, with its intricate battle mechanics, handcrafted scenery, and illustrative storytelling leaves an impression with the player.

Over the past few days, we’ve looked closer and closer at the storytelling portion, the words and transcriptions that are used and the impression that it leaves on the game.

We’ve only previously looked the words that have been said but not about how difficult it was to hear. 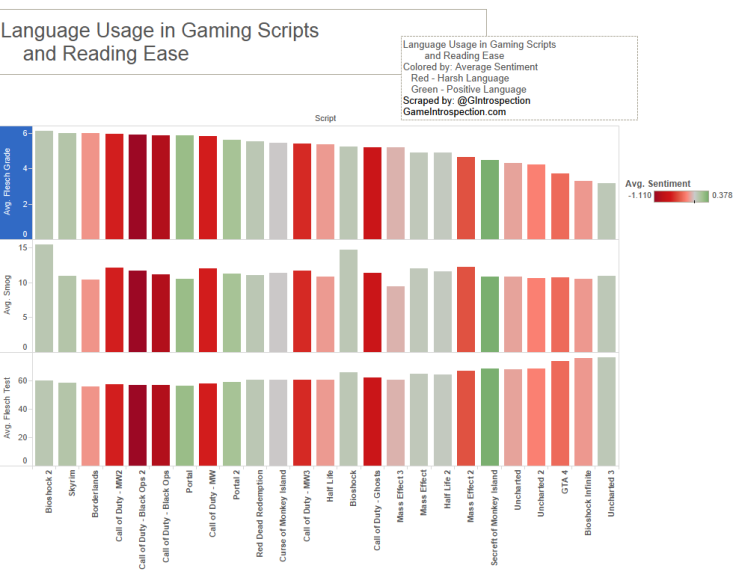 So this is how a game’s script reads. At least looking at the Flesch Kincaid Grade scale, it says that even the more difficult of scripts can be read by a 6th grader; 3rd and 4th graders can manage with the majority of the script as well.

END_OF_DOCUMENT_TOKEN_TO_BE_REPLACED

Gaming on Data: Gaming Script – By the Word We the Intent

Looking at a game and its script as a whole, it’s easy to get an understanding of what kind of game it will be. Having violence in a game is one thing, but having the characters in the game be in distress about it are two different things. You play the game and it stresses you. You don’t necessarily become immersed to the characters but the tension does rub off on you.

END_OF_DOCUMENT_TOKEN_TO_BE_REPLACED

Touching back on what we found out in the previous post was that games, in general, use aggressive language considerably. Granted this is from a small sample size of AAA titles, but are titles that permeate through the gaming community. Required reiterating in-case there are new readers to this post who hasn’t read the last one, yet. (Cough, cough.)

But the last post looked at a game as the sum of its parts and not the parts that made up that sum.

And there’s a reason for that. The parts of a game’s script are a bit messy, jumbly and noisy. The above is the running average of the sentiment, the polarity of aggression where negative (red) denotes more aggressive language and positive (green) denotes more friendly language. But these graphs for the most part are bit too noisy to make sense of them aside from the general feeling that a game is. Comparing say the Call of Duty games, where there’s very little green up top but a whole lot of red underneath, makes it easy to assume that its language is more aggressive in nature than say Portal 2 where the opposite is true with its green hair and ginger public area.

END_OF_DOCUMENT_TOKEN_TO_BE_REPLACED

Might No 9, the game where Megaman started to rebel against Capcom, the company that began to neglect the robot, so much that he decided to get cosmetic-enhancements done to his mechanic body and embody the 90s cool kid look in our post-3D world.

END_OF_DOCUMENT_TOKEN_TO_BE_REPLACED

Tom Clancy’s The (Troll Hard) Division puts you with a group of 3 post-apocalyptic sleeper agents in the midst of a viral epidemic killing off the US population and you have the single goal of looting every player and NPC that you come into contact with. It doesn’t even matter if they were situational allies or members of your own party, if they have a gun that you like, you can shank a fool and take it off of their body. What’s a dead body going to do to protest? Ragdoll in anger? At least, that would be what the E3 demo would lead me to believe that this game is going to play out.

The Open-world cooperative shooter-genre is definitely trying to explore new directions since Borderlands made its debut a few years ago for the closed party format and Destiny released last year as the drop-in drop-out open party format. Troll Hard has both a drop-in-drop out system where parties are automatically dropped into random servers with other random groups already in them but this is the first with a betrayal system that works contains both inter-party and intra-party mechanics.

END_OF_DOCUMENT_TOKEN_TO_BE_REPLACED 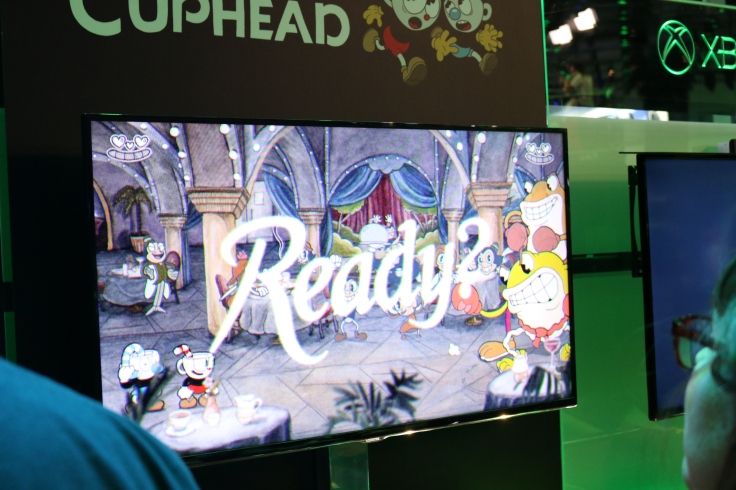 Like the 1920s, 30s, and 40s cartoons that the game emulates, Cuphead is an expression of what fun can mean without all of this newfangled futurism. The game is always rhythmic, bouncing to its own beat to keep up the liveliness that it tries to portray, but always extra expressive thanks to the big eyes and big head making it unnecessary to need nuanced, subjective feelings but instantly knowing the anger or anguish from having every possible feature, from the eyes to the hands to the body language shouting out their current state of being.

END_OF_DOCUMENT_TOKEN_TO_BE_REPLACED

The idea of the 2-hour return window for the new Steam Refunds policy had clear goals in mind. You buy a game, play through some of it to see if you think the game is worth playing through or if the game was even remotely functional. If you weren’t getting a good feel for the game or if it was just too frustrating to deal with (like having terrible controls, no clear gameplay to play with, and no fun in sight) you could just return it. Developers get punished for making and releasing a poorly developed game, which encourages better production value and having a clearer threshold of compitency that developers need to demonstrate before releasing their game. Players have less gripes about trying different games because they only have to commit to games that seem enjoyable, letting them take more risks in trying games that they normally wouldn’t with less worry about wasting their money.

END_OF_DOCUMENT_TOKEN_TO_BE_REPLACED

Effectiveness and the Playstyle Curve

The world and everything that resides within it has its own pace. Some things start and stop with regularity, others just move in their own direction at their own speed till the end of time. And as you play a game, you develop your own pacing. You might want to take your time for every platform that you need to jump from or corner that you need to turn and take in the risks to make sure there aren’t any surprises that you’ll recklessly run into, or you might dive in Action Hank headfirst into every situation tumbling and reacting to anything that’s in your way because you haven’t been punished enough for that recklessness.

It’s up to the developers to teach you what the pacing of the world is and manipulate the player into adjusting their playstyle to match the pacing that is required to be successful in that world. There isn’t an exact speed that the player much hit, but there are limits between the cautiousness and haste that a player needs to be between to play effectively in the gameworld. Visually, this is considered the playstyle-curve to see the relationship between different playstyle how effective those playstyles can exist within the game.

When a playstyle fits within the boundaries that of the game’s pacing, then a player is less likely to feel like the game is too slow because they won’t be able to take their time to check every nook and cranny for the inevitable damage that they will take and they won’t feel that the game is too easy because they can’t just run through and have their way with the game without consequence.

END_OF_DOCUMENT_TOKEN_TO_BE_REPLACED

Every game, with all its enemies and doors and health bars and platforms, has a set pace. A pace in how they move, when they move, how fast they move. And that pace, the pace of everything on screen, dictates the pace that the player can plan out their moves and it dictates the window that the player has to perform their plan. But when the pace of everything on the screen is rhythmic, meaning that the pacing matches a particular interval, is matched by the rhythm of the player to plan and perform within the window that the game gives then a sort of harmonic resonance can develop between the player and the game, and that can be a wonderful feeling to have.