Effectiveness and the Playstyle Curve

The world and everything that resides within it has its own pace. Some things start and stop with regularity, others just move in their own direction at their own speed till the end of time. And as you play a game, you develop your own pacing. You might want to take your time for every platform that you need to jump from or corner that you need to turn and take in the risks to make sure there aren’t any surprises that you’ll recklessly run into, or you might dive in Action Hank headfirst into every situation tumbling and reacting to anything that’s in your way because you haven’t been punished enough for that recklessness.

It’s up to the developers to teach you what the pacing of the world is and manipulate the player into adjusting their playstyle to match the pacing that is required to be successful in that world. There isn’t an exact speed that the player much hit, but there are limits between the cautiousness and haste that a player needs to be between to play effectively in the gameworld. Visually, this is considered the playstyle-curve to see the relationship between different playstyle how effective those playstyles can exist within the game.

When a playstyle fits within the boundaries that of the game’s pacing, then a player is less likely to feel like the game is too slow because they won’t be able to take their time to check every nook and cranny for the inevitable damage that they will take and they won’t feel that the game is too easy because they can’t just run through and have their way with the game without consequence.

It’s when there’s a mismatch of the intended pacing and the player’s pacing that friction and frustration gets ignited or bored aloof-passivity sets in.

There’s a nice mound where playstyles accumulate. While you may have people that take the time to gain a few wrinkles before they even think about picking a direction in a darkened corridor or players that want nothing more than to have god-mode enabled and play inconsequentially, most people live in some gradient between this range having a tendency towards caution but also able to let loose every so often and feeling liberated when being able to do so.

When you play and get a hang of a game, though, the developer can influence where the player’s play-comfort-zone is centered. If you play a game like Super Meat Boy, then the player learns to live by being a bit more reckless but still requiring some planning especially in the later levels of the game. 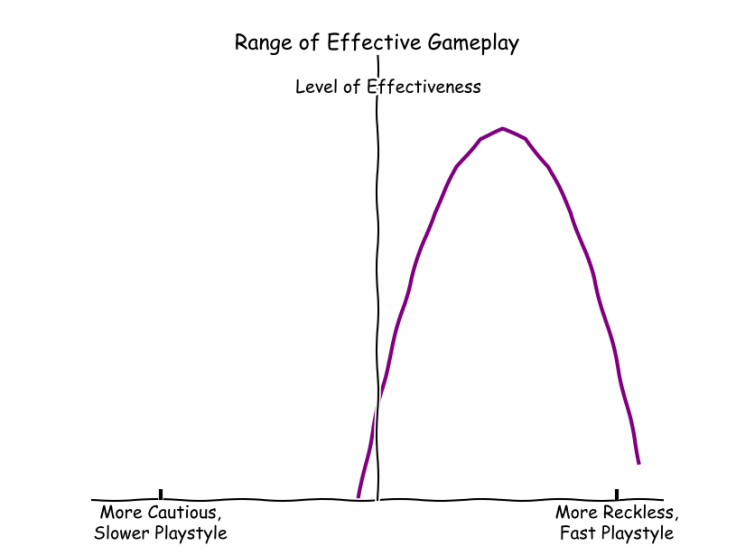 If you’re playing an RPG where save points are limited (Final Fantasy) then losing the past half hour of progress would be ridiculous if you did something as stupid as not save whenever you the opportunity became available so the player would learn to err towards caution. 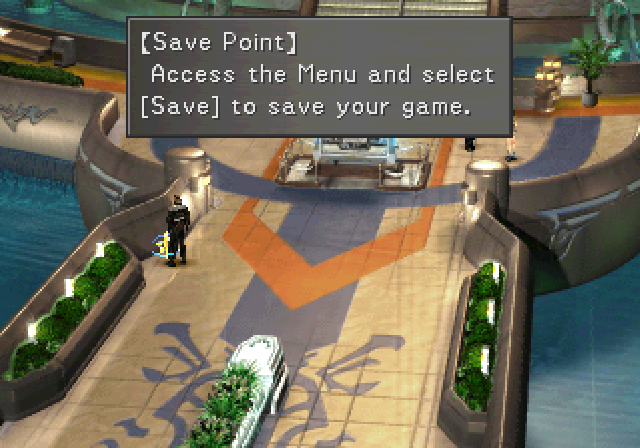 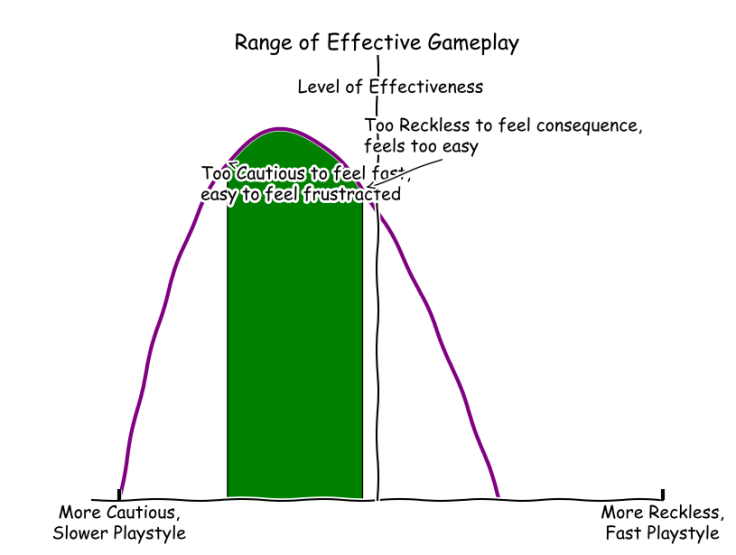 If your characters only have one life because it has permadeath in its ruleset (ala Fire Emblem), then the player takes less chances because losing a character is a travesty if they were a main character or because you were too lazy to heal your fighters before the battle so the player would learn to err towards caution and heal early and often. 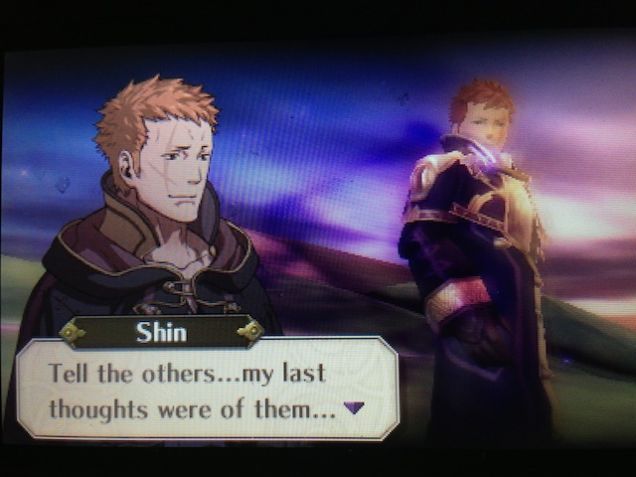 When the difficulty of the game gets better illustrated to the player, it is then when the game can become more focused in difficulty to where it is trying to move to. 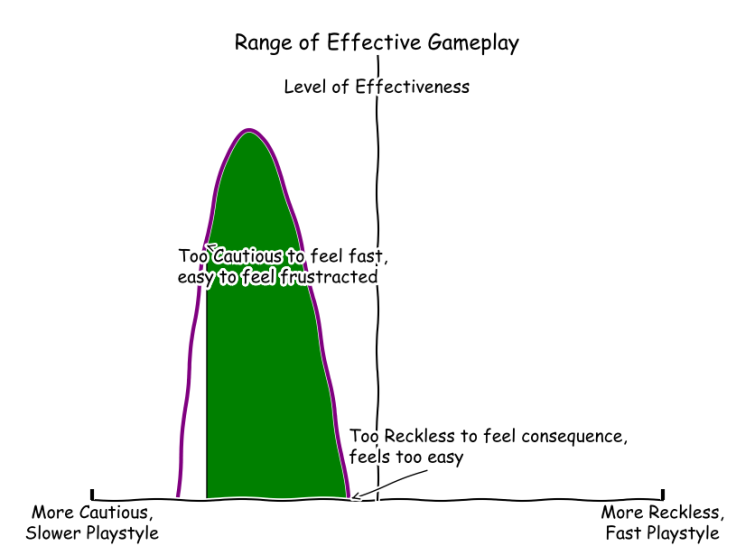 If the game does a good enough job it illustrates this clearly to the player so that they should have adjusted their playstyle to accurately reflect the needs of the game while still having fun. 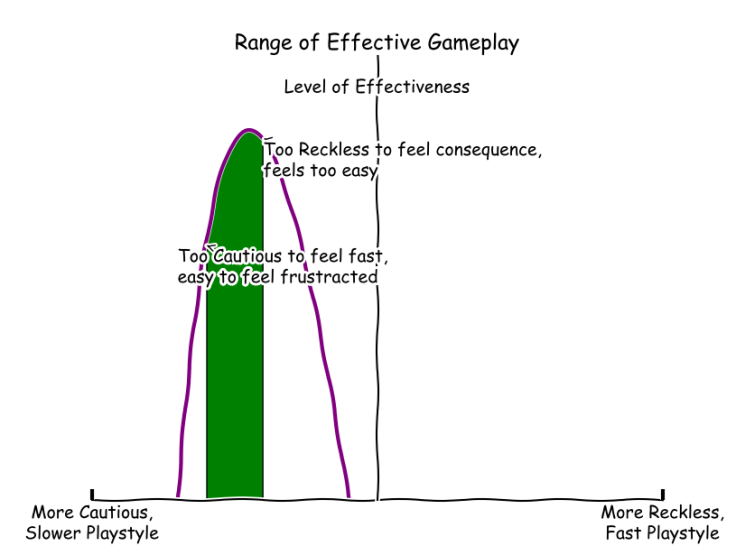 It’s looking at this transition in the playstyle-curve across the many levels of a game that help point out how poorly designed some game feel.

Take a look at my old punching-bag Sonic. A game that starts off promising fancifully reckless speeding but comes to abrupt halts within each level and throughout the game.

The graph swings erratically between cautiousness and recklessness that it becomes nearly impossible to tell what the game is trying to be when compared to its introduction. It establishes itself with speed at the beginning then quickly undercuts itself like it’s trying to take back everything it promised. “No, no, no. We’re actually ‘this’ kind of game. The wait-for-a-long-time slowly paced one with burst of speed sprinkled around”

Sonic 2 handles it a bit better with a more gradual change between being reckless-able and being cautious-able. Because the playstyle curve gets massaged a bit more incrementally, asking the playstyle to change isn’t as dramatically jarring to the senses. But there are definitely moments where you lose that sense of recklessness, also known as the lower track in Sonic games.

The lower track tends to be a slower paced track where you excruciatingly feel that loss of speed and freedom the moment you’re knocked down into the lower track. Many more perils are below the haven above but you’re only sent down there because your playstyle wasn’t good enough, so you’re getting a readjustment towards caution instead of the wreckful mindlessness that pushed you down to the lower track in the first place.

But that’s ok because the default for Sonic in Sonic 2 is to start on the upper-track, the fast-track. You get to play on the fast-track for as long as your playstyle is effective enough, otherwise you’re punished with the lower-track, the slow-track. But you’re given plenty of opportunities to try your hand at the fast-track again. That’s why I don’t think that Sonic 2 even having a lower track for many levels is a problem because it lets you play in the more fun track for the majority of the game, only taking away that fun as punishment.

Much like punishment, which encourages more caution to the playstyle-curve, reward should work in the other direction. As the game gets harder and the gameplay focusing your playstyle to a sharp point, the most rewarding thing to a player is to give them a few moments of freedom from the restrictions of a forced playstyle.

That’s why the go-to restriction to remove is typically damage. Temporary invulnerability, so no matter how stupid your movements are, how delayed and mis-timed your actions become, you don’t have to worry about that stupidity causing you harm if only for a short-time. Other games give it to you by less extreme means like the ability to take an extra hit, dealing more damage, different more damaging abilities or safer abilities, more mobility, etc… Generally anything considered a power-up helps relieve the pressure of a game with more constricted gameplay.

But what got me originally thinking about the pace of the game defining a specific playstyle was on my last playthrough of Transistor. The normal game has you playing red-light-green-light during combat to choreograph your attack against enemies on stage. Giving you a set amount of energy to chain different combinations of moves that makes you feel like a tactician and heavily disrupts the chaos of combat to make it more manageable, you more empowered, and innovate from typical turn-based combat.

Stop-and-go is well and fine and the intended way of playing the game, but this past playthrough wasn’t my first time playing through the game, and I knew from the beginning that my combat moves could be used outside of the “timeshift” mechanic that was taught and pushed early on.

You can play through most of the game without using “Timeshift,” in fact, with very little penalty if you know the combinations of moves that work best as you progress through the game. When you play without a seemingly fundamental mechanic of the game, it completely changes the strategy, the difficulty and the feel of the game from initial inception. You’re no longer playing cat and mouse games waiting for your “timeshift“ to recharge but instead laying a full-frontal assault where the strategy is knowing which moves should be used on which enemies, requiring a better optimization of your attacking abilities and modifying them to synergize the best, and better enemy knowledge to know which is the most dangerous threat. All of these emerge as more prevalent descriptions for the combat of the game because you’ve restricted an ability (the timeshift) that makes the game safer and more caution focused. By taking away the “timeshift” the game is much more punishing for poorly developed strategy and lack of understanding about the game. I only ever fell back into using the “timeshift” because I played too recklessly, letting the safety of the “timeshift” allow me to regroup and re-think a strategy without having to game over.

Not all games can take away a mechanic and still deliver a well-designed game, though. Transistor is only able to pull this off because even without the “timeshift” you can still play effectively within the game.

Not all games have a mechanic that can be taken away. Like the playstyle-curve change when you punish the player, you rarely take away a mechanic that reckless play and have it feel more enjoyable. You want the game to allow the player to play more recklessly, not less reckless, while still feeling enjoyable and being effective.

I’m sure Transistor wasn’t meant to be played without the “timeshift,” cutting the game down from 4-6 hours to just over 2 hours in my last playthrough, having the stakes feel so much higher with a sharper penalty for poor choices, but it felt very rewarding. It wasn’t intended by the developers, but the pace felt a lot more hectic to deal with and a lot more to overcome. If only other games had this flexibility.

2 thoughts on “Effectiveness and the Playstyle Curve”