In a little town called Amsterdam, in the heart of Holland, just outside of the busybody-ism of its downtown by Amsterdam Centraal Train Station is a building with many floors. On the top of those floors there are many rooms. But of these rooms, there was one in particular designed for people to find solutions to get themselves out of the room. You’ve found the Room of Riddles.

Pictures are  strictly prohibited since it ruins much of the surprise for new players to try to escape, but this kind of space is a reminder of the old flash games on ArmorGames or Newgrounds where you’re dropped into a room with no knowledge about why you’re there or the context of the game, but clicking around to circle the room and the various items precariously placed on the walls and cupboards of the room to find items that you can use in that room to escape the room. 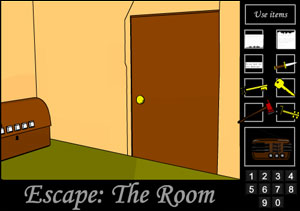 You find a flashlight. With the flashlight, you look around and find something shiny underneath the bed, which gives you a key. With that key, you try every lock that you can find in the room, but nothing works. You look up and notice there’s a lockbox on top of a bookcase, so you try the key and receive a photo album for your troubles. And so on, and so forth until you find a means of getting out of the room that you’ve been trapped inside for the past 15 minutes.

The concept was inspired by the older generation of Point and Click Adventure Games like Escape From Monkey Island, King’s Quest, and Leisure Suit Larry. Collect X, Y, Z, use X to bribe a guard to go to a new area and collect XX, use Z to trap villain sidekick looking character and collect new item YY and so on.

The actual room that you find at Room of Riddles is more number/lock oriented but the concept is the same. You have a room and given only a flashlight and walkie-talkie. You have 60 minutes to get out of the room and no other knowledge except for what are valid/invalid mechanics that the player can perform. From there, you are given clues by your RiddleMaster, similar to a dungeon master except their job is to guide the player to the solution when they are stuck, and depending on how well you’re doing in solving the current set of puzzles then you’re given more clues or less clues as the game goes on. Think of it like auto-balancing the difficulty of the game based on the player’s performance. This particular room is set-up to accommodate 1-6 players so large groups can try to divide and conquer the room’s puzzles.

With being a few generations removed from the early iterations of the Flash game “Escape the Room” scenarios and many more past their predecessor, the Point and Click Adventure Games, it’s interesting to see the translation to the tangible world being done. I talked about this in a GameIdea post earlier, creating a space where game’s scenarios can be enhanced by allowing more senses to be present in the game.

Being “Present” in a game.

What I mean by being more present is by giving more senses of the player agency in a gamespace. When you play a game on a traditional console platform, you generally only have 2 senses present in conjunction to the game, Sight and Sound. The sound is questionable because background sounds used to be non-existent and Sound Design wasn’t really pioneered until the PC and the later 3D era of console gaming demanded it for a better push to realism. Peripherals and large elaborate arcade setups helped the immersion process by adding Movement into the experience of gaming by making more of the body present in the game and having other agency of the body exist in some isolated pocket of the real world but not being present in it nor being present in the game world. The more senses being given agency makes the presence of those senses a part of the game-space.

With the Oculus you have your sense of Sight disappear from being present in the real world and transported into whatever visual-landscape was designed by the game-developers, but more importantly you also have the information of your head’s movements transcoded into the gamespace, as well. Before, it was just your eyes being present in the game-space. With the Oculus you now have your whole head present in the game (minus the mouth, nose, skin, hair, neck-hair [worse than hair if breathed on heavily]).

Room of Riddles having a space available to live-out a scenario gives you the ability to allow more senses to be present in the game which added to the sense of immersion that is held while playing the game. Instead of having a handful of my senses present and the others detached from the experience, the room allowed all of my senses to be present throughout the game making the game easier to feel immersed within the game. Though all of my senses weren’t all exercised throughout the experience, they were still noticeable because of the coherence in signals that the different senses coalesced together because they were all present at the time.

I think this idea can be used as inspiration fuel in enhancing our idea of what games can be, not just designing how experience will be just visually, but also audibly or touchually (tactile-y). While the experience isn’t always portable, it is an enhanced experience. Universal Studios, Disneyland and other amusement parks sell these kinds of experiences on a large scale, but having these large space isn’t always necessary. These space become more obsolete with hardware like the OculusVR being able to instantly transport you to whatever visual-quest that you want to be in.