In preparations for a future project, I’ve been playing all of the old Sonic games for the Sega Genesis to get a feel for how the franchise has evolved over the years. These early Sonic titles were picked because they are widely regarded as being the better Sonic games and on the better side of platformers of the 16-bit generation. But somewhere on its march towards the present the series has consistently stumbled and tries to pick itself back up. But this interpretation of the Sonic’s past is a bit muddy because even at its roots, the games have been a playground of trial and error for how these games want to represent the Blue Hedgehog.

At least for the purposes of this article, I’m limiting the games to Sonic, Sonic 2, and Sonic 3.

The Sonic games have always had one big commonality among them. Platforming and Speed. But, when push comes to shove, which are the developers going to make the priority? You can’t always balance these two aspects when making your game, so one will supersede the other at some point.

Sonic is advertised as built for speed, so why should speed take second seat to platforming? If speed was really the only then you can have a flat infinitely long stage where you can run as fast as you want forever.

That would mean that there needs to be some challenge involved in the level, so platforming is introduced with enemies and running areas scattered about the level. But, the more clustered the hazards, the slower the gameplay becomes.

There’s an inherent problem with having too many things on the screen to pay attention to. You not only need to divide your attention to each individual object, but add to this the cycling of old objects off of the screen and new objects onto the steadily moving screen at a heart-pounding pace, then you might find it hard to follow everything that you should and should not be able to do in the game.

This means that enemies are not good for speed. More importantly, enemies change the momentum of speed.

When you’re running on the sidewalk and things fall in your way, tree branch that you have to hop over, skunk you need to avoid, car that almost runs you down, the speed at which you’re running gets hindered. Or, you’re driving down a road at a brisk 45 mph but you suddenly hit a traffic jam, changing your pace of constant movement to stop-and-go, then it dramatically shifts your perception of movement.

To talk about this in Sonic for rest of the article, I’m going to just use the term Perceptual Momentum.

Sonic 1 took the idea of balancing platforming and speed in many variations, testing the impetus of Perceptual Momentum. The game opens up in Green Hill Zone where the emphasis of the level is devoted to speed. The level has several different routes where you can exercise your ability to move quickly through the world, loops and springs to help the Speed come across with very little penalty for running into the hazards of the stage. The only real penalty is taking a different route than you’d otherwise take.

It’s strange that the game would then follow Green Hill Zone with Marble Zone, where the pacing of the level strongly de-emphasizes speed in favor of heavy platforming mechanics. You wait for moving platforms and traps to move away at what feels like a snails pace in contrast to how you normally move. In fact, the majority of the levels in Sonic 1 felt relatively slowly paced, outside of Green Hill Zone and stage 3 Spring Zone (aka the Casino Level). 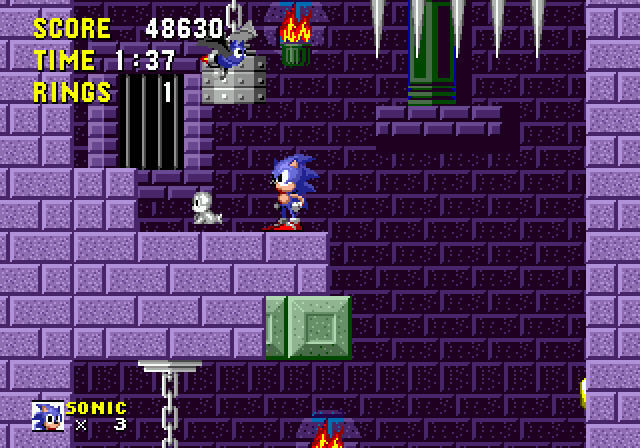 There are moments of speed in each level, but never enough to feel like the game was a speed with platforming, instead of a platforming game with a speed ability.

Sonic 2 opens up similarly to Sonic 1 with Emerald Hill Zone, a level highly motivating speed with little emphasis on platforming. Sure, there is some platforming to worry about, but with opening up multiple routes to travel through, there is no hard-penalty for failure in platforming early on in the game. There is a punishment in that the lower routes tend to have more hazards to worry about, but Perceptual Momentum is still at a high pace and doesn’t come stumbling to a walking pace for failure.

The next level is Chemical Plant, a level that has you moving at a high speed, but has a greater penalty for messing up.

The level is generally lax about its penalties., At worst the level makes you redo certain areas because you got impatient, but for the most part you never get slowed to a crawl. Except for that one area where you might drown yourself. That’s just annoyingly slow.

The other levels, have a much higher emphasis on speed than those in the Sonic1, but I did want to talk about Mystic Cave Zone in Sonic 2 because it is one of the slower levels of the game, but is still feels much better paced than the level in Sonic 1’s later stages. 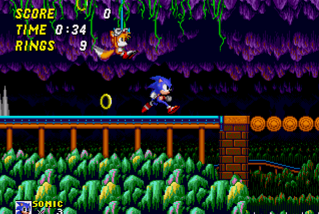 Even though the level has plenty of hazards to worry about, your focus is never interrupted because the momentum of the level never allows you to gain full speed. Instead, the level is designed to feel cramped and filled with hazards, so even running at half speed gets you to feel fast. You’re jumping from ledge to ledge, grabbing at switches and pullies while avoiding being crushed. Your speed helps you to navigate the level better but not necessarily to get to the end faster.

The level is a great example of perceptual speed only being necessary, and not true speed. You feel fast in much of the level because you’re navigating obstacles quickly, not just because you’re moving (in the traditional sense) through the level quickly. 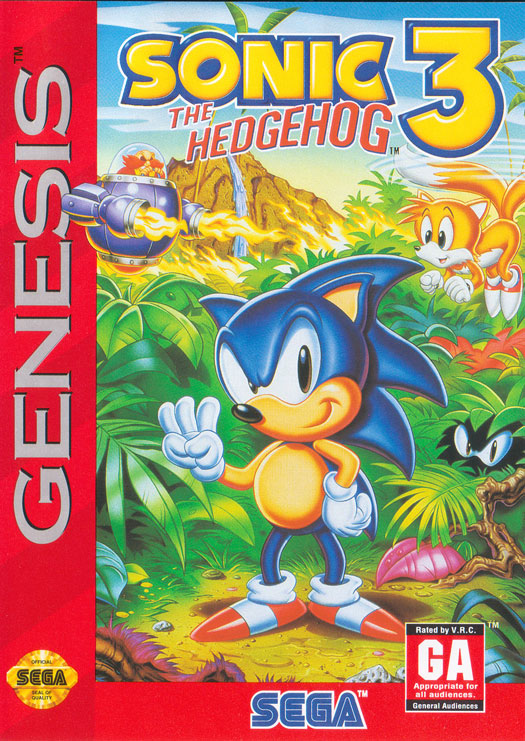 Sonic 3 opens up much differently than Sonic 1/2. Angel Island Zone never really emphasizes speed in its level. In fact, speed is never really emphasized in any of the levels as part of the gameplay. You open up with heavy ledge-to-ledge platforming and traps that keep you moving slowly or even send you backward. Have you ever felt like you made negative progress when playing a game? This game is great to teach you that feeling.

All of the levels have nonsense like this. You aren’t only penalized for not performing well, but your Perceptual Momentum is consistently low throughout the game. What’s worse is, in most levels speed is a shortly given reward for progression instead of the default design of the game.

This is Angel Island Zone

These are the areas where you can run for a short while.

What’s interesting is that these elements of not understanding how Sonic should focus itself persist throughout the franchise. The franchise has always been in contention with how to represent itself, either as a fast-game with platforming or a platformer with fast sections, how should patience and accuracy be rewarded, how should replayability be rewarded.

I say replayability being rewarded because the more you play the game, the better you remember where the speedy places are so you make less mistakes, being penalized with slower areas less often.

These symptoms can be found across the full Sonic franchise and the games are at its best when speed and platforming are at its most balances, the games most fulfilling when speeds are high and Perceptual Momentum uninterrupted.