This isn’t a post about what I hit during PAX, since at the time of writing this PAX Prime 2015 hasn’t even happened yet. This is a preview of games that has piqued my interested and am hoping to get my hands on it for a playthrough.

For those that don’t know, Indie MegaBooth is a section of PAX specifically carved out for the Indie developers with something innovative, stylish or fun to get some exposure and hands on the controllers.

There are a lot of great looking games on the list, and while I’m only going to talk about a handful of them I still encourage others to take a look at the indie megabooth site and give a few of them a try or to find me and the indie megabooth developers at the booth during PAX and spend a few minutes finding hidden gems waiting in smaller lines than the over publicized 2 hour linecon that you’ll find in the rest of the showroom floor. Some of these games are already available on Steam and other systems so you can even check them out now.

An Isometric Combat engine as its core, Hyper Light Drifter touts an amazing level of detail in its pixel art able to evoke a need to explore. It doesn’t look like another Transistor/Bastion clone, through I’m sure there will be comparisons made; it does look like it has its own fully realized world that it will portray and richly detailed one that I might be able to get lost in.

Party Games. Hard to come by nowadays, but when you find a good one and have the right setting for it, hot-damn is it a fun time. Top-down competitive shmup with party rules. What kind of rules? How about you’re only visible when you’re shooting. How about you can only be a certain distance away from another person? How about bumpers?

I do hope this game gets viral somehow or at least has a big enough user-base so that more game modes get made. I really do miss party games, especially ones with easy rules to pickup and go like this one. I think the appeal for this is that it will be intuitive to pick up and go because the rules are so simple to tell someone that doesn’t have experience with the game or gaming in general. 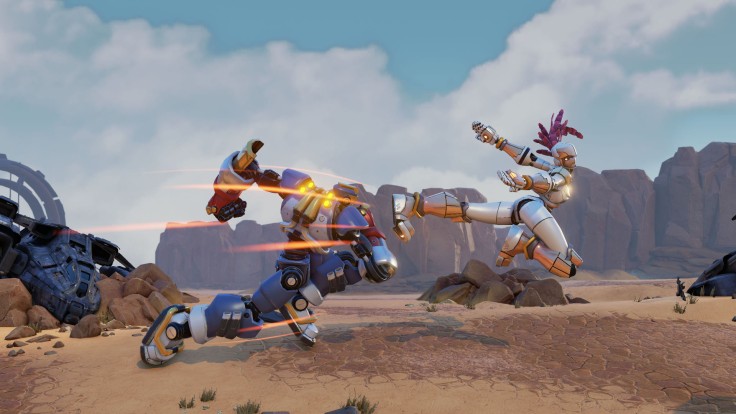 Headed by the EVO Fighting Game Champsionship series founders and other fighting game experts comes a game able mechs that wale on each other. The people behind that game would know how to build a proper meta for the game, so I’d want to see how balance this fighting game could be. Luckily the game is already available to play so I can get my online battle-bots right now but will still be taking competition while at PAX.

Captain Forever Remix is what you get when you mix the arcade classic Asteroid with Legos and make it a rougelike against other lego shaceships. You build your ship with the random parts given to you in any configuration that you think you will keep you alive the longest or destroy the most ships.

The gameplay looks hectic and crazy fun and the there’s this Adult Swim animation and Cartoon Network personality that I’m can get behind making it something that I look forward to spending some time with in the nearterm.

Oh right, Absolute Drift will be there too. Already did two write-ups on the game here and here, so check them out if you’re interested in what I have to say. It’s already out on Steam.