Does a game’s narrative always need to be presented?

We play games for many reasons. To have a ready-steady shoot-em-up time, to watch over-the-top explosion filled action set-pieces, to have an emotional ride through the struggle of the human condition, to have a few minutes of escape from our current reality in a world completely disjoint from our own. You start up a game (can we really not say “pop-in a game” anymore? Is that obsolete?) and you go in looking for that game to fulfill some criteria for you. Sometimes that criteria is already known. You’re in the mood for a mindless bullet-feast or you’re looking to strum your plastic guitar to some Beetles music or whatever. Sometimes that criteria is unbeknownst to you, so you walk into a game blindly and hopefully some aspect of the game is worthwhile. But does this mean all parts of the game need to be there for you to enjoy it? Are your priorities always the same when you start up a game?

I ask this because of games like the Dark Souls/Bloodborne series approach to how it deals with story, mainly which isn’t really presented to you. The story is present but not presented to the player. The player can read descriptions and text to figure out all that’s going on but they aren’t given a mandatory lecture of the game and its world. The player isn’t even given a synopsis. But is that a problem? 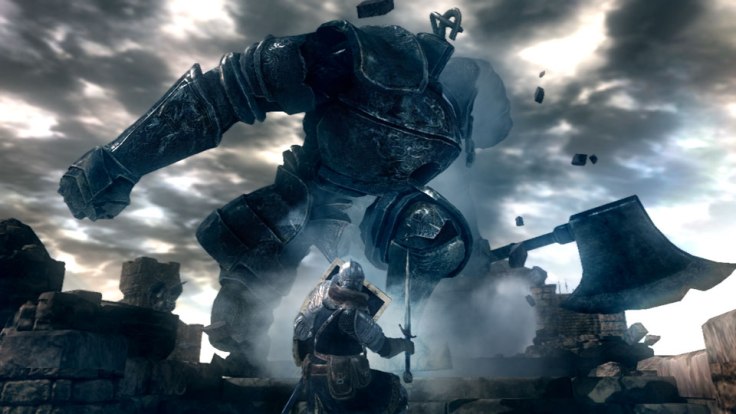 Games in the NES era always had a story behind them, but the era’s memory limitations made it difficult to have highly dense stories and sweeping narratives built into games. These stories were relegated to background and synopsis for the Instruction Manual and Nintendo Power. It wasn’t really until Playstation/N64-era games that have a story be not only mandatory but present within the game. And near the end of the Playstation-era to have a story be presented to the player, shoved in ear with clunky voice acting and all.

What does it mean for the narrative to be present vs presented?

Is there a narrative within the game, a background for the world and how it came to be, an understanding of motivation for you and the characters that you interact with? Then there is a story present.

Are there people talking at you or are you listening in on a conversation where the motivation is being explained while taking a break from the typical gameplay? Then a story is being presented to you.

Having the narrative be presented to you leaves a bit of a conundrum with pacing. You’re breaking up the gameplay which has its own set pace with a story with forced narrative that has a different pacing. The story in a game needs to be presented in a way that makes it either compelling to the player or that doesn’t disrupt the gameplay for too long.

This is essentially a paradox that most games have to cope with, the sudden and immediate temporary loss of agency for the player-character. For a few moments the player is disconnected from the character while the story is ham-fisted your way.

Some games cope with this paradox by keeping the narration compelling, either through spectacle, through character building, or through player driven interaction. Giving some value to the narrative gives meaning to having a narrative other than to drive some semblance of story forward.

What’s different about the narrative approach that a game like Dark Souls takes is that it doesn’t create a pretense of faking its game’s pacing through a narrative. It leaves all of that to the player’s discretion. The only mandatory story you’re given is a very brief instruction of the where and the what. You’re then left to your own devices.

What this means for most players is that you go and play slay-die-die-slay to your hearts rage-limit. It’s only when you’re interested in the story that you can go through your inventory to get a better understanding of the world you’re in, why the monsters that you’re encountering exist, who the people are in the world and so on. The game’s pacing isn’t broken up forcibly by the narrative of the game and it lets the player stay in the rhythm of action that they acclimate to.

You can also say that this was to limit voice acting budget, animation budget, need of a director and to reduce the overall costs of the game for something inconsequential, but you can say that about many aspects of the game. At least for the Dark Souls series, the games have an incredible amount of detail in seemingly inconsequential elements like scraps of paper billowing in a corner or intricacies in the architecture or number of scales on a monster. This makes the lack of forced narrative seems deliberate rather than a cost restriction.

Mario Galaxy handles its narrative a bit like this. There are very few moments where the game rips the controls from you and it only does so to give a quick motivation for you. The only story to be found is in Rosalina’s library where you hear her origin story, but even this isn’t forced on the player. You can go there whenever you want to learn about the background of the game when you’re looking for the story or for some downtime; you’re never forced to have mandatory storytime when you’re still in the rhythm of platforming gameplay that Mario is good at pacing.

But sometimes you’re looking to play a game for the story and the way that a game like Dark Souls presents the story is probably very lackluster. A game like Dark Souls was never made to be a good story game. It is made to be a good test of active problem solving, reactive observation learning and architecture porn. That only matters if it’s what you’re looking for when you turn on the game, so not every game does need a strong presented narrative. It can get in the way sometimes and only matter when that’s what you’re looking for.