Teaching the Player p2.2 – More on Reactive vs Planned Gameplay

Previous posts in the Series Teaching the Player

And a link to the part 1

The Speed Running community is a fantastic example of people who take every opportunity to transition all games from a Reaction to Planned Gameplay. They approach every game with its predefined rules and regardless of how well a game teaches you a mechanic, the speed runners put in the time to perfect the most opportune route and routine in getting from the start to the end of the game. They epitomize the idea of “Reaction Gameplay + Time = Planned Gameplay” by learning all of the inadequacies of the player’s abilities and the gamespace’s rules and manipulating them to get a more optimized path for faster completion, and shaving frames, seconds or even minutes off of runtimes by understanding what can be done by the player and what will happen in the gamespace when the player performs the action.

But the only way they can perfect their routes and shave those precious seconds, aside from sharing their routes with other speed runners, is through creating learning spaces in order to practice the more technically demanding abilities that the player must perform in order to get their World Record times. Through save states and playing through areas dozens, hundreds, or thousands of times the speed runner can understand the outcomes of many of the games quirks so that when they try their World Record attempt at a game, they can perform the abilities required with a high frequency of success.

If you get the change to watch any of the Speedrun Marathons, at least AGDQ (Awesome Games Done Quick) or SGDQ (Summer Games Done Quick), I’d urge you to because it’s inspiring to see people get good enough to completely destroy games and shit on designer’s intentions towards games that are considered difficult to the more casual player’s first confrontation with the game. If not, you can always visit http://speeddemosarchive.com/ and see the records on a game that you’re interested in seeing broken.

But the way that speedrunners approach a game is a bit impractical for normal gamers. It’s hard to consider a game fun if the player is completely frustrated by not being able to do (perform) or know when to do (recognize) even the most basic of controls. Most players don’t even want to devote the hundreds of attempts and dozens of hours in playing a game just so that they can perform even those basic moves.

What’s important is that speedrunners as well as regular players require a Learning Spaces in order to become proficient if not master the moveset required of them when playing the game. Stages or sets of levels meant to introduce a player to an ability and designed to impart knowledge of the mechanics (perform) and usecases (recognize) of that ability. The best approach to this is to design areas with low risk in order for the player to get introduced to the ability and slowly add variants to the environment where the solution is to use the ability.

Probably one of the best worst-instances of this is the Wall Jump in Super Metroid. This move is one of the most difficult to understand and master abilities in a renowned game that I can recall off of the top of my head. With a few frames of opportunity to execute this command and little instruction on how to do so, the player not only requires a stress free area in order to try and interpret the ability, but an indefinite period of time in order to become proficient with the ability. Thankfully, there are absolutely zero enemies in the area and the room is set up in a way that requires many consecutive executions in order to escape the room. This may be a bit repetitive, but because the execution is so difficult to pull off, this requires more repetitions from the player in order to prove that there is an actual proficiency with the move. If the move were easier to execute, then the forced additional repetitions would be pointless because the player is already proficient with the move.

The Metroid series is a great example of teaching the player because upon acquiring any new ability, the game constructs scenarios (The Problem) for the player to learn the usecases for using such an ability and where the ability is the only solution (The Solution).

When you encounter this room in Super Metroid, the only thing you’re able to do it move left where you can acquire the morphball and the only way that you can get out of the area is to learn how to use the morphball. Simple enough.

Now you can venture off into the adjacent room, but you can’t open the red door on the right. But there are these holes by your feet that are small enough to morph ball to fit. So you morph ball in, you drop down towards another path which leads you to the missile. Now the player can backtrack and open the red door as long as they attempt the set of abilities that they currently have on it.

I’ll do a proper LTA of Shovel Knight in the near-future because it’s an all-around amazing game that is able to take and master many game design paradigms to make an overall easy to understand but difficult to master experience. This game is a close representation to a thesis of proper game design to the platforming genre, which is hard for me to say because over the past few years Rayman Origins/Legends were the games that felt the closest to being a Love Letter to 2-D Platforming games.

But with regards to the game design, the game does a great job at teaching the player to notice the many cues (recognize) that require specific abilities of the player. The downward stab for mobility, the dust knuckler or the flight sword to maneuver through many of the stages (optional). But the way it does this is by designing areas (The Learning Space) where the only way to get through them (The Problem) is to use cues and abilities that the player should have in order to accomplish the goal (The Solution).

Instead of looking at every instance of this for now, I’d rather devote the rest of the post in showing how it uses the early stages to teach player how some walls are destructible and why it is important to the game. 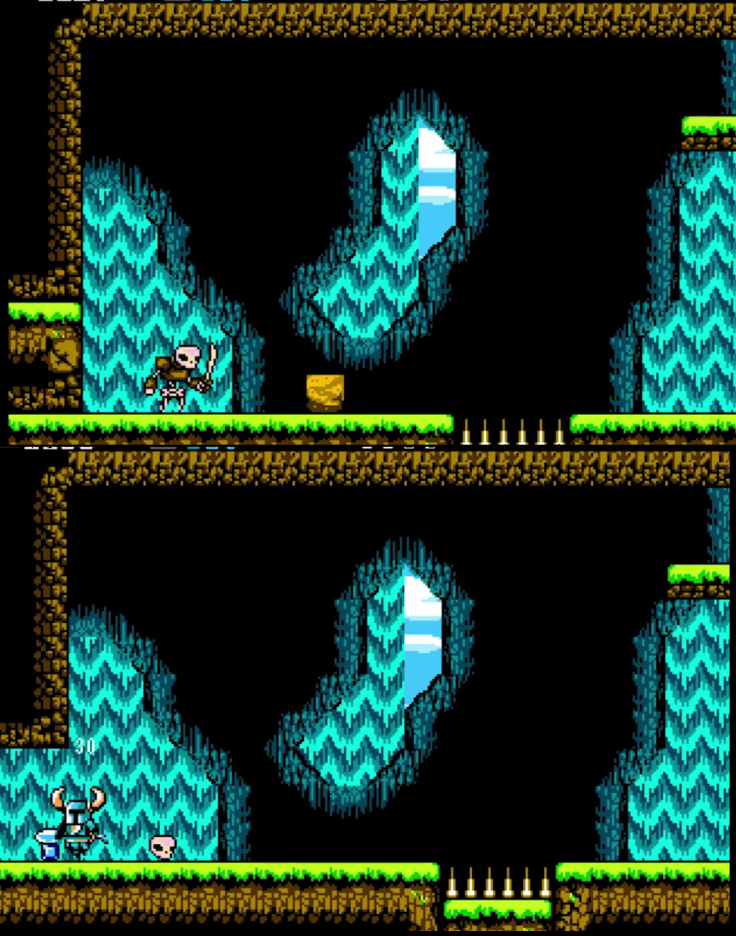 The player can now transition to the next screen and we see a blemished wall on the left side of the room. The room is set up to where we see an opening on the right to progress in the game, but because the room is symmetrical with an enemy on the left side, we give notice to the left side of the screen and therefore notice to the blemish on the wall. If we decide to explore this area, the player finds a room of treasure teaching the player that exploration by finding these kinds of destructible walls can lead to rewards in the game. 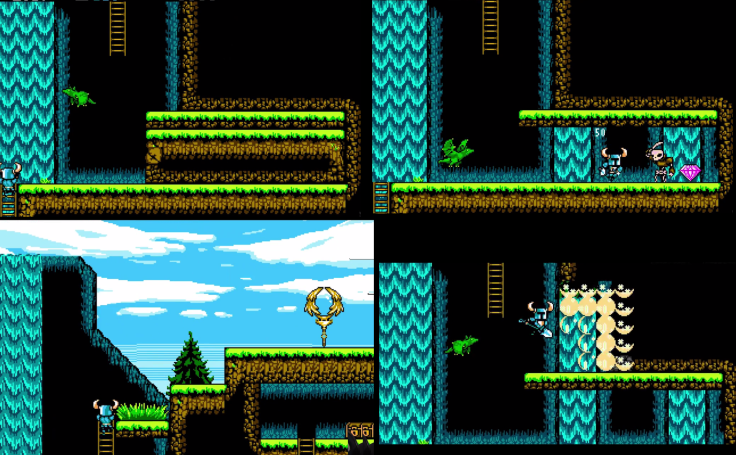 Further along in the first level, we see the noticeable blemished wall again as the cue that there is something worth exploring. Nothing new, just reinforcement of previous training. But when you climb up the ladder (bottom left), we see that we are actually missing a ladder to get to some treasure. So in order to get to it, we need to travel back down and find another destructible wall in order to reach it. The destructible wall design is consistent throughout the various levels of the game. The blemishes to notice may vary, but the mechanic is persistent.

The mechanic is only mandatory for one section of the game and if the player isn’t proficient at recognizing the mechanic, it doesn’t make the game unplayable but the game still offers plenty of learning spaces for the player to recognize a problem and has taught them the solution to overcome that problem.

Good mechanics in a game are important, but teaching the player to recognize, confront, and apply those mechanics are just as important if not more important.

Exploring more ways to teach the player in the future. Follow the tag.

One thought on “Teaching the Player p2.2 – More on Reactive vs Planned Gameplay”