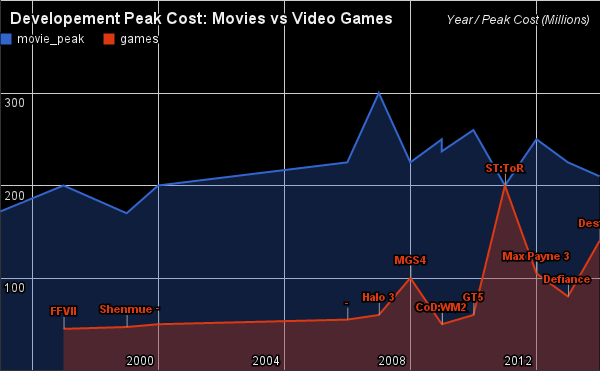 As anyone in the industry should be telling you, graphics doesn’t equal fun and some of the most costly things about a game are graphics. Large teams of artists, designers, story writer, motion capture crews and voice actors, all working together to make a large-scale game what it is. Not just the graphics. Graphics aren’t a substitute for fun, but it can help amplify it. We don’t necessarily go into every game looking to have fun the whole time, but to think, to experience a different world and to get lost in a well told story for a while. It’s our form of escapism that we choose to occupy our reality with. One that is interactive and one that isn’t necessarily possible in our own reality.

Large scale productions don’t necessarily give you fun, but they give you opportunity. Opportunity to develop a mature design, develop detailed backdrops and sceneries, get the best voice actors in the market to bring all the characters outside of their reality and accepted in ours.

I will preface this with not every big budget game does this well, and I prefer indie games because they have a better sense of identity with how the product should be. That being said, there are sources of entertainment to be had in both the big-budget market and the small-budget one.

This leads me, in a long-winded approach, to thinking about the Summer/Winter blockbuster seasons. Summer when movie blockbusters come out and Winter when gaming blockbusters are released. Where movie studios break the bank trying to pump out the most visually appealing ride for the movie goers. So I went to here to find historic costs of the most expensive movies and compared it to for the most expensive development costs in games.

This graph is interesting in that production costs slowly growing more comparable to movie development, with actors and artists and voice actors, but we’re swapping out Visual Effects people for Developers and Artists. We can even see a bump in 2011 when Star Wars: The Old Republic came out and $200 million dollars was spent to get the things out there in hopes of being a World of Warcraft contender. The story was engaging, voice-acting was movie quality, and worlds were stunning on my first play through but that was a bit ambitious to throw so much money at the project.

The gaming market, with the consolidation of many of the big budget companies, is getting more  ambitious in their productions. This could mean a larger influx of artists and developers needed as new projects get started, although that means less developers for the mid-level cost productions in the near future.